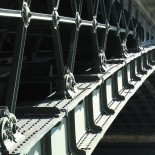 The sometimes serious, but generally frivolous, musings of a city girl now living in the woods.

I actually saw Silver Linings Playbook before I saw The Impossible, but with the plague going around our house, I was forced into survival mode.  No extraneous writing.  Just snuggling with the kid and watching bad television–not simultaneously, mind you.  We try to keep the kid from too much televised crap. 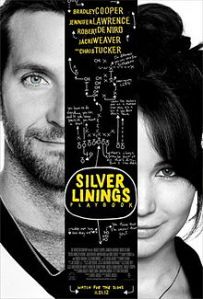 I went to see Silver Linings Playbook nearly a month ago.  I was pretty excited to see it after the string of, shall we say,  *somber* movies I had been seeing recently.  I must admit that I find Bradley Cooper’s shaggy hair, beady eyes, and Hangover-starring scruffyness to be a little off-putting.  But I love Katniss and all her badassery, and the trailers all looked pretty funny, so I tried to think of Bradley as Will from Alias and got on with it.

Unlike the last movie I reviewed, this was not nearly as angst producing or challenging.  In fact, it was just a pleasant movie-going experience.  The quick and dirty is this:  Bradley Cooper plays Pat, a bipolar guy just getting out of a court-appointed mental hospital and trying to put the pieces of his life back together.  He has to go live with his parents and desperately wants to win his wife back.  He has become something of an exercise addict and is trying to find as many silver linings in his situation as he can.  Along the way he meets Katniss and she is damaged, differently, mind you, but still damaged.  She, like Pat, says really inappropriate things, has slightly outsized ambitions and is needy as all get out.  Together, they form a friendship that turns into something more as they rehearse for a dance competition she dreams of winning.

In some ways, it is a really remarkable film.  I mean, Bradley Cooper does a really nice job being his charming self, but slightly off-center and really uncomfortable.  He is shifty and just on the edge of a breakdown the entire time.  And DeNiro, as his dad, plays the other side of mental illness.  He, too, is compulsive, but for so many reasons that could happen to anyone–luck?  the right people?  a good job?–he has managed to navigate his life without hospitalization or major incidents.  Chris Tucker plays a friend from the hospital and Jennifer Lawrence is a messed-up young widow, and the aforementioned inappropriate new girl.  There are some touching and odd scenes between Pat and his therapist, played by Anupam Kher, whom I know from Bend it Like Beckham, but is also a national treasure of Bollywood.  Throw in a huge wager and some Philadelphia Eagles football and it could be a scattered mess.  But no, it is a touching romantic comedy that also shows mental illness in a complex way.  It is clear how much of a burden it is on Pat’s life–how just-so-close to the edge of danger he resides–but it also shows how crazy the rest of us are, too.  And it does that without glorifying mental illness either.  He is decidedly NOT the wise crazy guy while we are all in our bubbles of bullshit.  It’s just really a decent portrayal of life with crazy.

But then it’s just a movie.  It’s a very typical romantic comedy, whose ending you can see coming ten miles away.  And, really, all the good jokes are in the trailer.

Oscar season in our house used to be a celebratory, nearly sacred time.  But then we had a kid.  A lovely kid–delightful, even–but a kid.  A kid that makes us tired and need help just getting out of the house.  So unlike in the past, when I had seen all the movies–even the foreign ones–the last few years have been a little thin on movie-going.  A Harry Potter here, an Avengers there, but not much to speak about.

In a big cinematic turnaround, this year I have seen a lot of the films.  Not all, but a lot.  And I have so many opinions.  So!  Many!

Before I give you my predictions–because I know you have your office pool to prepare for–I thought I might just say a little bit about the Best Director problem this year.  See, I love me some Ang Lee, after all he made a couple of my all-time favorites, and there is no question that Spielberg is one talented mofo, but it seems to me that important directors have been left off the list of nominees.  First, Ben Affleck directed one helluva film.  Argo‘s pacing was incredible, the performances lively and the tone, perhaps most trickily, managed to be both stern and light at the same time.  That a director was able to make a film that made me laugh, while also showing a bit of recent history and, thereby commenting on the US’s rather dismal record in the Middle East, is remarkable.  He shoulda been on the list.

And then there’s Kathryn Bigelow’s omission from the list.  I understand that the industry’s reaction to Zero Dark Thirty is complicated.  It’s just that both technically and emotionally, she directed one of the best films of the year.  And if I believed Hollywood was suddenly having scruples or a principled reaction to a potentially implicit endorsement of torture, then, great.  But see, this is the same community that after Newtown refused to accept that it might be a complicated piece of the Violence in America puzzle.  From all corners of the industry, we heard, “no, we don’t have to change, people just need to have the morals to make better choices.  Hollywood doesn’t put guns in troubled people’s hands.”  OK, so maybe that’s true, but seriously could y’all glorify violence any more?  When young people are saturated in it, there is some chance that we grow up desensitized.  (And, no I don’t think Wayne LaPierre, president of the NRA, was right; he’s a douche.)  I just think that the industry cannot choose to ignore the context of so many of its films (Jack Reacher, ahem) and then highlight one of them for being somehow irresponsible.  At least Bigelow had the guts to show how gruesome torture actually is.

Last, I would like to say that I think a great little movie has been robbed this awards season:  Moonrise Kingdom.  It was a weird, sweet, romantic tale about kids in love.  The performances were odd and endearing.  The set and the costumes and the overall look of the film were lovely.  It was somehow very nostalgic and heartfelt, while also being current and having some universal truths about being a kid.  (OK.  I know.  Universal is not a thing.  Is it possible for middle school to be the same all over the universe?  Obviously not.  But you know what I mean.)  I loved it.  I just think that Wes Anderson should have been looked at more closely.  That, and most of his other films, have been great, and rather unacclaimed.

I am off my soapbox.  That was my knee by the way.  It’s getting better, thankyouverymuch. 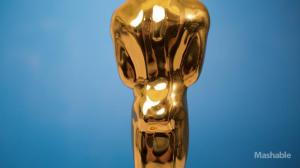 My Predictions (and Sundry Commentary):

I think it’s going to Argo.  It’s a straight-down-the-middle kind of a pick.  A little topical, but not too controversial.  It has a great cast and it makes Hollywood look good.  Plus, Zero Dark Thirty is too scary, they almost never give it to musicals, so Les Miserables is out, and the Academy seems a little squeamish about Django Unchained‘s violence.

Except, I am worried about Silver Linings Playbook being the spoiler, here.  It was nominated for hella awards, and it is also the kind of not too dark, but not too Disney film that the Oscars like to reward.  Luckily it’s a romantic comedy and the Academy never thinks those are worth of recognition.  So I’m sticking with Argo.  Just barely.

I think this is between Steven Spielberg and Quentin Tarantino.  The academy likes to reward white people who make good films about people of color.  White savior’s and all.  Tarantino, while culturally significant, is still like Hollywood’s bad boy, or at least irritating class clown.  The violence and uncomfortable subject matter seem to make Academy voters squeamish.  So, Spielberg.

I almost want to scratch his name out and put in David O. Russell.  He is one of those Hollywood guys that everyone likes and wants to give an award to.  But is this the right movie?  This year?  Ugh.

I am starting to rethink my picks.  Maybe I should just do a straight SLP ticket.  Hmm….

She was terrific, though in my humble opinion, it was not as “lead” a part as some of the others.  I think voters want to recognize her young talent AND steer clear of Jessica Chastain, who was the best actor of this group.  She was amazing.  (I have not seen Emanuelle Riva, in Amour.  I understand she was, in internet speak, amazeballs.)

No brainer.  He’s gotten all the acting awards leading up and, in the past, actors who sort of disappear into their showy, costume-y roles are nearly always the ones who win.  I do think that Bradley Cooper was really pretty good at his particular brand of crazy.  I also think Denzel Washington was pretty fantastic, as he managed to be human and likeable, and a bit cowardly and thoroughly consumed by his addiction in Flight.  I’d like to see more recognition for him in general.

It is Annie’s to lose.  I am not sure she was the best performance, but she was absolutely gutsy and heartfelt.  I’d like Helen Hunt to get recognized, but hers was really a Lead Actor performance in a movie no one saw.  So, my money’s on Anne.

So I have only seen a couple of these films, and this is often the category in which voters recognize performances in films that are not actually getting any of the big, big awards, or that nobody has seen.  Still, I think Hollywood loves this guy and want to show some love for Quentin Tarantino, so I’ll go with him.  DeNiro was good, but not spectacular.  Same goes for Alan Arkin.  I actually think that Goodman, also in Argo, was better and if the Academy had nominated him, especially for playing a little against type, he might have a chance.

So this one is seriously hard to call.  All of the films here were original, surprising and compellingly written.  I couldn’t decide if this was where Zero Dark Thirty would get some recognition, or if they are going to be blanked altogether.  I want Moonrise Kingdom to get a little reward for its offbeat sincerity, but ultimately, I chose the one I thought most Oscar voters would.  Plus, Quentin Tarantino is beloved, in a strange, not-really-beloved way.

This is also very difficult to call!  I mean, all these original works are interesting and clever, and all of them have been turned, I believe, into very interesting films.  (That said, I am the only English speaker on the planet who read Life of Pi and didn’t like it.  So sue me.)  Nonetheless, I believe Argo is riding high on its “What, no Best Director nomination?” indignation, so I suspect it will win this one.  Silver Linings Playbook may be the one to beat here, though.  It was also based on a beloved novel and the film has garnered lots of accolades,  Hmm.  Maybe I should change my pick.

And, the only award that will not be a surprise, I predict Skyfall will win Best Original Song.  Here’s Adele now:

One comment on “Another Movie aaand …. It’s Oscar Season!”

This entry was posted on February 23, 2013 by Girlsage and tagged moviereview.